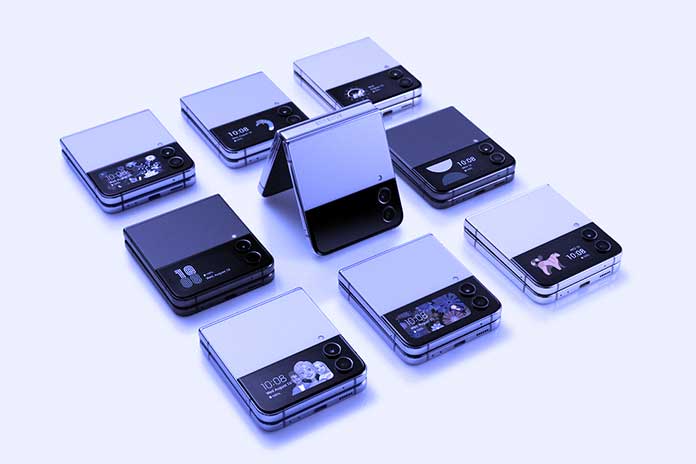 Galaxy Unpacked: What Do We Expect?

As usual, numerous rumours about new products existed before the event. Exactly five pieces emerged. A successor to the Galaxy Z Fold3 and Z Flip3, as well as a new generation of smartwatches and new in-ear headphones.

It starts with a sketch of how exactly the unpacked should be created. For all those who are impatient: We have already had the chance to see the new products. Here you come to the article about the new foldable. You can get all the information if you are interested in new smartwatches and headphones.

TM Roh, CEO Of Samsung, Confirmed. Today There Is The Fourth Generation Of Foldable

The Galaxy Z Flip4 is shown in a commercial, with the new “Bora Purple” colour in the foreground.

Instagram, in particular, should be adapted to the new form factor. A preview is shown in the upper part of the display, and the start/stop button of the recording is shown in the lower leg.

Bora Purple is the “main” colour, which is also advertised with BTS. The Flip4 is more robust against scratches and is also IPX8 waterproof.

The Galaxy Z Flip4 Is Available In Over 75 Colours!

The Galaxy Z Flip4 Bespoke Edition can be customised on the frame and back to create over 75 combinations.

Now There’s Something For The Ears; Samsung Shows The Buds2 Pro

The highlight should be the 24-bit audio support. The Buds2 Pro also has 360 ​​​​audio, ANC support, and LE audio (updated later in the year).

Besides the Bora Purple (from the Flip4), there is also a white colour and a black colour. Samsung’s new headphones should also be well integrated into the Samsung ecosystem.

There It Is, The New Galaxy Watch5

Samsung’s new watch comes in two sizes (40mm and 44mm). She is said to have better sleep tracking, be more resilient to scratches, and have better health tracking. A temperature sensor should also be able to measure fever. The battery should also be improved by 14 percent, and the watch should charge 30 percent faster.

Here Are The First Prizes!

Samsung has just confirmed the first prices of the new products. The Buds2 Pro costs 229 euros. The Flip4 starts at 1099 euros. The Galaxy Watch5 is available for 299 euros.

Samsung has now made the packaging of the devices from 100 percent recyclable materials. At least one part per device is also completely recycled.

Samsung promises to listen to customers. Can the fold be lighter? Yes, the Fold4 should now only be “light” at 263 grams. The hinge is said to have been improved to make it softer. The processing is said to have remained the same. The fold should be able to be folded a total of 200,000 times.

The Z Fold4 Got Some More Improvements

The front display has become a bit wider, and the “Under Display Camera” has also been improved. The pixels are now arranged differently. Android 12L has a taskbar, which is said to have significantly enhanced multitasking. Microsoft Office should now be better adapted to the form factor, especially Office and Outlook.

The Fold4 still supports the S-Pen and got new cameras. The primary camera now has a resolution of 50 megapixels, and the telephoto camera can zoom up to 30x. Other apps such as TikTok or Chrome should be better adapted to the new form factor.

Now There’s Something Else On The Arm: The Galaxy Watch5 Pro Was Introduced

Google and Samsung introduced WearOS 3 last year. Now there are new apps for clocks. Soundcloud and Deezer will bring new apps to the watch. Later in the year, there will also be a “full-fledged” Google Maps app.

The Watch5 Pro Is For “Extreme Athletes”

Samsung probably wants to forestall Apple and compete with Garmin. The Watch5 Pro is made of titanium, has some exclusive sports features, and costs 469 euros. There is also a Golf Edition, which will probably only be available on Samsung.com.

The Z Fold4 Comes At A Price

If you want a Z Fold4, you must put at least 1799 euros on the counter, according to Samsung, in the unpacked stream. All devices can be pre-ordered now, with street sales starting on August 26th.

Do You Want To Try The Devices Yourself?

Samsung has set up two experience stores in London and New York. But there is also one in Berlin on the Kudamm, which is now open. That was it with the event and, with it, the live ticker. We have already been able to try out the devices ourselves. Here you come to the fold/flip hands-on and the new wearables. Thank you for reading!