The Future Of Internet User Growth

The internet has seen astonishing growth over the past few years, but this is beginning to raise questions about when this growth will start to level out. Naturally, it would be impossible for internet usage growth to continue indefinitely, because at some point, full saturation will be reached in terms of the people in the world with internet access, and there are only so many hours in a day for people to be online.

Here, we look at why we may soon begin to see internet usage growth take on a less steep curve, and also at the sectors that still can provide a lot of scope for growth.

What Caused the Recent Steep Growth in Internet Users?

When it comes to how many people are connected, the main source of growth has been in developing countries. This includes a big growth in mobile usage. While people in developing countries, especially in rural areas, may not have access to things like fibre optic Wi-Fi, they are beginning to become much better served when it comes to mobile data plans. Affordable smartphones have also meant that worldwide, smartphone subscriptions have seen a 41.1% increase between 2017 and 2022, with 6.259 billion individual subscriptions around the world, according to research by Melita.com.

The population of the world is around 8 billion in 2022; however, this includes babies and young children who would not be part of the target market for smartphones, so it is clear that saturation for smartphones is not extremely far away. This is good news when it comes to the idea of a fully connected world, but also means there is only so much potential left for growth. Forecasts predict a growth of around 1 billion new mobile users by 2025, with these coming predominantly from Asia and Africa from areas that are currently underserved.

Budget smartphones have allowed for a lot of growth, but even iPhones have seen growth, with a 10.9% increase in Apple iPhones sold between 2017 and 2022. Of course, phone sales themselves don’t tell us much about growth in overall mobile usage, as many people buying a new iPhone may be replacing an existing phone. 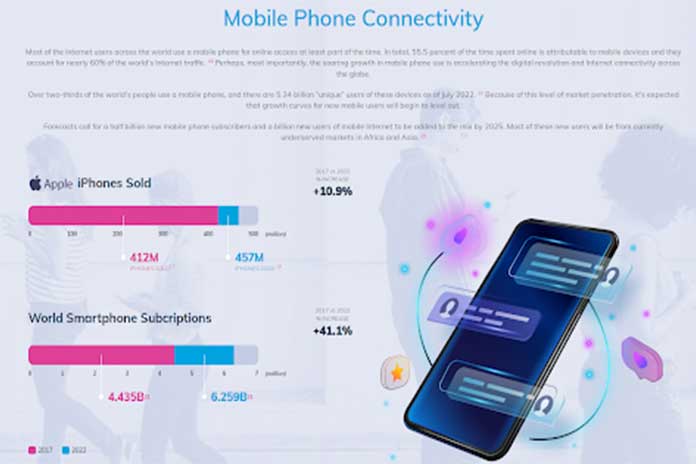 What Caused the Growth in How Much Time Users Spend Online?

As for the growth in how much time we spend online, it is likely that the pandemic was a large contributor towards this. In 2021, the average adult spent 6 hours and 58 minutes using the internet, including all devices, while in 2017 it was 5 hours and 54 minutes. The increased need to use the internet for things one might usually have done in person like school classes, meetings and socialising with friends and family, as well as people having less entertainment options, certainly changed how we saw the internet during the most restrictive periods of the pandemic.

This probably isn’t the only factor that contributed, however. The general trend towards streaming that has been adopted by both consumers and media producers also probably played a part. With people moving further away from things like cable TV and towards online services like Disney Plus, Netflix and Amazon Prime, some of the time people previously spent offline watching traditional TV broadcasts is now spent streaming online content. Netflix saw a 545.6% increase in hours watched between 2017 and 2022, and while this is in part just due to a growth in the popularity of the platform, Netflix was not a small or new company in 2017, and also now faces a lot more competition than it did back then. 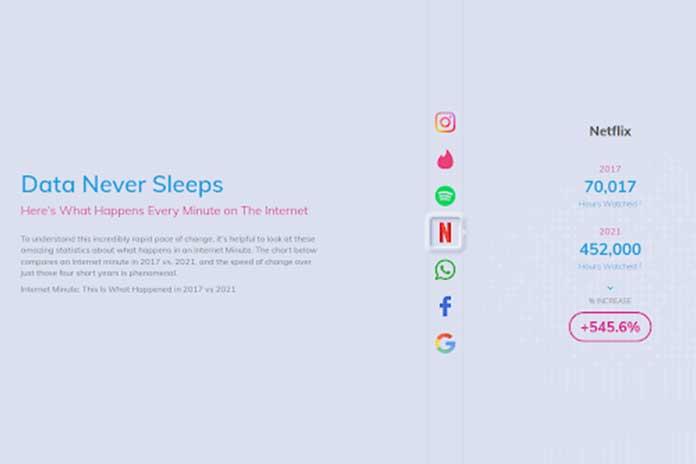 This trend is likely to continue, with media companies going all in on the Netflix style model of releasing series in full for people to watch as they please online, rather than weekly episode releases. Many movies now go straight to services like Disney Plus, too, as the traditional movie theatre model suffered heavily during the pandemic and movie goers on the whole have not returned to pre-pandemic levels.

As the world begins to return to normal, some people may retain some of the habits and ways of working they developed during the pandemic; for instance, many businesses may continue with hosting more of their meetings online, and people may continue to prefer watching movies via streaming rather than at cinemas. However, it is certain that some things, like shopping for essentials, are starting to be done in physical shops again, so the growth in the amount of time we spend on the internet is likely to slow down.

However, some sectors are certainly growing. Online gaming has been on an upwards trend that doesn’t seem to be slowing down, and as uptake of things like VR technology increases, this may well be a source of growth in terms of how much of their time people choose to spend online.

As you can see, there are certainly reasons why we may be fairly close to a ceiling in terms of internet usage growth, and unusual circumstances over the past few years may have sped us towards that ceiling faster than would otherwise have happened. However, there is still scope for growth, and so while it will probably slow down, it will be interesting to see how things change over the rest of the decade.