Was Mourinho The Principal Architect Of Anthony Martial’s Decline At Man United? 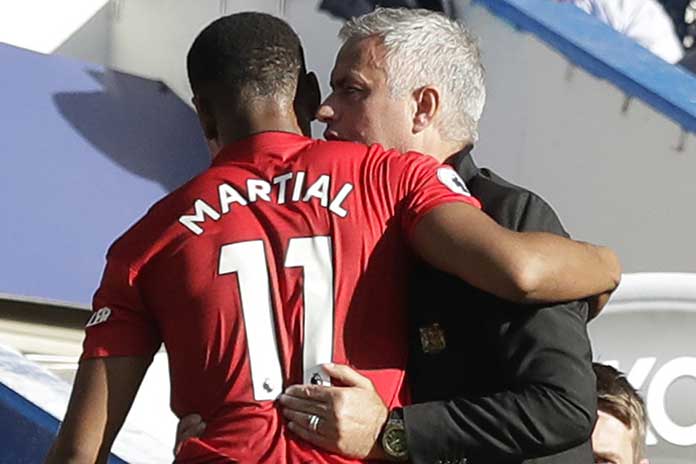 Back in 2015, can we say Man United under Louis Van Gaal were legitimate contenders for the Premier League? Inarguably, they had attractive odds from some of the best international bookmakers on liontips.com to win their matches. But even then, they were yet struggling to recover that historic spark of the epic Alex Ferguson era.

When Man United took to the pitch on September 12, 2015, against their ancestral rivals, Liverpool, they were not the outstanding favorites. The game was pretty dreary until the introduction of Anthony Martial.

The young Frenchman was bursting with youth and optimism. The English press was awash with curiosity – if not contempt – for how a lad as young as Martial could command the premium transfer fees (£58m) Man United paid Monaco for his services.

Well, Martial wrote the world a Nobel-prize-winning introduction of himself with a delicious debut goal that sent Man United fans raving with delirium.

Martial would follow up on such a beautiful debut cameo by having a reasonably delightful debut season. He bagged eighteen goals – further garnished with eleven assists – in 56 appearances.

Man United fans inevitably drooled about a beaming future, especially as Martial’s rise coincided with the emergence of another academy star in the person of Marcus Rashford.

Much of that hope didn’t come to pass

Admittedly, a lot has happened since a 20-year Martial burst into the scene at Man United. Coaches including Mourinho and Ole Solksjaer have come and go. But then Martial’s Man United career appeared to have stalled.

Now 26 at way down the pecking order at Man United, Martial is eagerly pushing for an exit from Man United in the January transfer window. But would you blame him?

He has been paid weekly to keep the benches warm under Mourinho, Solksjaer, and even now under Ragnick. With a forward line inundated with the mouthwatering talents of Cristiano Ronaldo, Sancho, Cavani, Rashford, and Mason Greenwood, it is unlikely that Martial would be getting a consistent run of games.

But what really went wrong for Martial at Man United? Let us roll the tapes back a bit, shall we?

One of the most unfortunate incidences that befell Martial’s Man United career is the exit of Louis Van Gaal. It is a well-known fact that coach changes often come with player casualties.

Martial was one of the few beautiful things that happened for Man United that season under Van Gaal. After missing out on Champions League spots, they managed a consolatory FA Cup triumph.

Of course, Martial was central to their successful FA Cup run. He scored a crucial goal that aided Man United’s triumph over Everton in the semifinals.

An absolute favorite of the Dutchman, Martial didn’t particularly make the good books of Mourinho. For Martial, Mourinho’s 30-month tenure at Man United was close to traumatic.

In almost 106 appearances, he could only manage 27 goals and 18 assists. This was a dramatic decline from the peaks he struck under Van Gaal.

A number of reasons triggered and sustained the attrition between Mourinho and Martial.

First was Martial’s work rate. As we know, Mourinho is not the biggest purveyor of attacking football. A large slice of his successes in football is built on counter-attacking teams.

This didn’t sit well with an offensively minded Martial who felt Mourinho’s style of football was too negative. What is more, Mourinho’s brand of football places enormously emphasis
on work rates for wingers.

This is terrible news for the species of attackers like Martial. This category of dribbling attackers is equipped with a sizable arsenal of fanciful football tricks.

Therefore, they prefer to be absolved of defensive duties to focus on producing the goals and entertainment for the crowd.

Mourinho would never give his attackers a “holiday” from defensive duties and tracking back to halt the opposition’s attacks. Martial’s inability to race back to catch the opponent’s full-backs was a source of friction between him and Mourinho.

Mourinho also questioned Martial’s mental resilience. Reports were rife that Mourinho felt Martial was mentally weak and allergic to constructive criticism. The Portuguese felt Martial sulked like a spoiled baby when left on the bench or sacrificed (substituted) to rescue a match.

Well, the climax of the drama came in July 2018 during a pre-season fallout in the United States. Against Mourinho’s directives, Martial left camp in Los Angeles (flying to Paris) to be by his partner’s side during the birth of his child.

This was further aggravated by Martial returning late to camp. For Martial, his decision was vindicated. On Twitter, he said: ‘Thank you all for your posts. My little Swan is fine, for the mom it was harder but thanks to God she’s better now. Sorry, but my family will always come first.’

This didn’t sit well with Mourinho. After his side suffered an embarrassing 4-1 defeat to Liverpool in a pre-season friendly match, Mourinho shed a bit of his disappointment with Martial to the press:

‘He has the baby, and after the baby is born – beautiful baby, full of health, thank God – he should be here, and he is not here.’

Not the best way to tell Martial congratulations for the birth of his child, but Martial was fined £180,000 for his fatherhood escapades. This was the equivalent of the wages he accrues from Man United in two weeks.

Mourinho would later attempt to sell Martial that summer, opting for Inter Milan’s Ivan Perisic. However, Man United’s board blocked the transfer.

Ole Solksjaer succeeding Mourinho in the dugout didn’t produce the anticipated resurgence in Martial’s fortunes. Yes, he enjoyed a mini-renaissance in the 2019/20 season, scoring 23 goals. This was his best output since Van Gaal left Man United.

Under Ragnick, Martial’s chances are not the most promising. The respected German understands Martial’s push to leave in January. But then, Ragnick is only willing to sanction his exit if the deal favors Man United.

“We (Martial and I) spoke at length. He explained to me he’s been at Manchester United now for the last seven years and he feels it’s the right time for a change, to go somewhere else.

“I think in a way this is understandable, I could follow his thoughts, but on the other hand, it’s also important to see the situation of the club.”

Yet, we wonder how Martial’s once burning career at Man United has been drastically reduced to cinders of the glorious past.

Would Martial be able to forgive Mourinho?