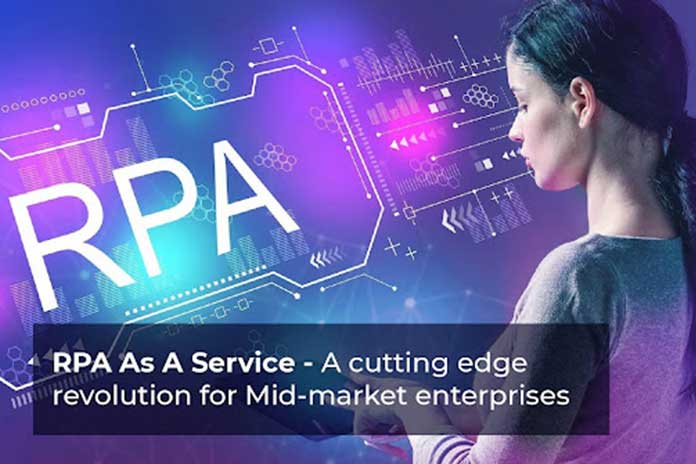 When founders have a clear vision of their charter, the mission of mid-market enterprise becomes more than the starting line. Generally, with less than 1000 employees, companies often require outsourcing activities that are intrusive from core solutions. The way I observe the recent exodus to the cloud is proof that companies have wholeheartedly accepted this philosophy.

With robotic process automation (RPA), the cloud has become the default option for many enterprises because it delivers profitability on the scale, internet accessibility, and security.

In the innovation culture, experiments are encouraged. Furthermore, mid-market enterprises play a big bet on their employees. Having a relatively small group, these companies are experts in their domain and well equipped in the business process.

Automation would have been easier for them if only the RPA market had been easily understood. Between the varied pricing model by different RPA vendors, and bundled solutions with features, most of which would be required later in the enterprise growth cycle, that’s what makes RPA not so trivial a purchase for organizations.

On the other hand, RPA- as-a-service (RPAaaS) is an effortless way of providing the developer’s automation capability without the requisite fixed cost of RPA infrastructure and license.

By leveraging RPAaaS on the cloud, a company can abate hefty infrastructure costs, upfront license costs, and expensive infrastructure.

Currently, RPA vendors like UiPath, Automation Anywhere, AutomationEdge offers RPAaaS solutions that include low on code and high on “drag & drop” functionality. These capabilities make the intuitive user interface open to automation across the enterprise.

With an RPAaaS solution having plugins that integrate with a common system of record on the enterprise, RPA is no longer an alien space, but inter-cosmic space travel across the enterprise galaxy.

I discovered that less than a thousand employees, most of the mid-market companies are short on resources which is essential to robust the RPA system through the implementation.

During the initial stages, it seems like landing a plan on helipad but once installed, such a system can be updated and maintained securely. That’s what makes RPA unique from other solutions.

With RPAaaS users no longer have to worry about the latest version update. Instead, users would be more focused on the automation of the function they are designing.

Full-fledged on-premise RPA implementation comes with a mature governance model, which is not required at the beginning of an enterprise.

Hence, a check-the-box approach that intersects all the requirements of financial, legal, and accounting is appropriate for the early stage of growth.

During the initial stages, not all processes are needed to be run every day, many run quarterly or annually. By following the same way, employees can monitor these processes easily and efficiently.

Another benefit of RPAaaS is that it equips enterprises with an RPAaaS community and forum that can help developers to be in sync with the latest hacks, updates, & previews that they can bring into their craft.

I have observed that the RPAaaS community is giving a boost to DIYs mentality of developers and users. And with the right RPAaaS partner, it provides unconditional support that a burgeoning company expects.

Most of the digital leaders in the RPA space first led the market with an on-premise product.

With on-premise RPA offering comes the periodical releases that halted all the business process midway. To customize the “last mile” to those implementations’ enterprises need expensive consultants. This customized implementation needs expensive hardware. As a result, the customer was locked on the vendor’s calendar for new upgrades and releases.

The new generation RPA enterprises come with cloud RPA offering that puts an end to the shortcoming of earlier RPA offerings.

With cloud-native offerings, users can get behind the scene development easily with upgrades and maintenance. This being the innate self-service provides an automated management experience across a public, private, and hybrid cloud.

Even with cloud-native offerings, current buyers are often struggling to implement the RPA model due to pricing doublespeak. Because some products are charged per user and others per month.

With long contract time comes the higher value of price breaks. I believe users should be avail of transparent offerings such as a consumption-based model that allows them to track how much they have consumed.

From on-premise RPA to cloud-native offering, the RPA market has evolved from the traditional license-based models of yesterday. While the conventional model might be suitable for some enterprises but it is not one size fit for all.

The flexible and leaner RPAaaS option can offer small and mid enterprises the esprit de corps of community and grasp. With the right direction and approach, RPAaaS not only become helpful but the solution of choice.

Also Read: How To Recognize That Your Company Is In Need Of Robotic Process Automation (RPA)?