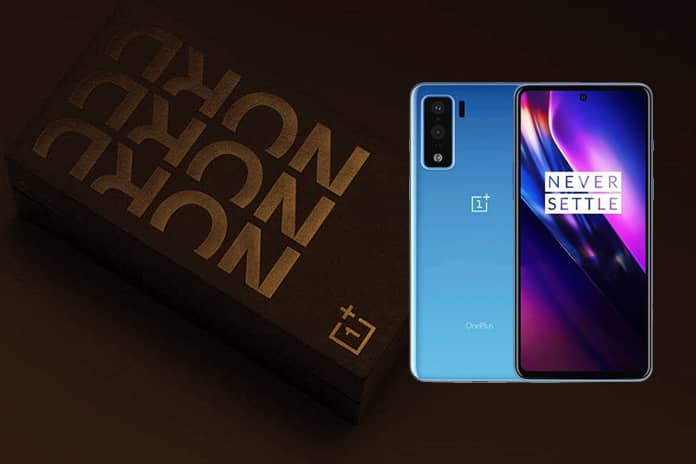 we expose the OnePlus Nord data 5G sheet in which we include features, specifications, photos, video and price. This mid-range smartphone is characterized by its 6.44-inch screen with FluidAMOLED panel, its 48 MP + 8 MP + 5 MP +2 MP rear camera. It also comes equipped with a Snapdragon 765G that will provide 5G connectivity.

The new OnePlus Nord is the first phone in a new family of manufacturers that, as many will imagine, is called “Nord”. Translated into Spanish as “North” the intention of the brand is to represent with this name the path to growth and success. Is this reflected in the brand’s new mid-range smartphone?

The intention of the firm is to cement its new family in three basic aspects: A good camera that is based on a trusted brand that has worked to offer the best user experience on their phones. After years of price increases, this will be the first phone from the brand that will not attempt to compete with the highest-end phones on the market, but with those of the premium-mid-range.

Among the most notable differences between this model and the OnePlus 8 launched at the beginning of the year, we stumbled upon a higher quality dual front camera, new camera filters inspired by the Nordic countries and, above all, a much lower price.

These are all the features of the OnePlus Nord .

The smartphone inherits much of the screen characteristics of its older brothers, such as a 6.44-inch perforated panel with a FullHD + resolution of 2400 x 1080 px that ends up resulting in a density of 408 dpi. Its double hole for the front camera ends up generating a 20: 9 aspect ratio that is completed with a 90Hz refresh rate that favours a smooth movement around the screen following the legacy that the brand has emphasized since the launch of the OnePlus 7 Pro last year.

To this, we must add that the Nord’s screen has 2,048 levels of automatic brightness. This favours smoother gloss transitions and greater eye comfort, either when browsing social media or reading a usage guide. In addition, the mobile can filter blue light to completely eliminate colours.

As for the design, we lose the IP68 protection but the mobile is still protected by Corning Gorilla Glass 5. In addition, the fingerprint reader is located on the Fluid AMOLED screen.

Inside the phone, we find a mid-range processor, but it has virtues such as turning the OnePlus Nord into a cheap 5G mobile. The phone uses a Qualcomm Snapdragon 765G that offers 5G NSA and SA connectivity. It is a chipset made in 7nm that is capable of executing its work at 2.4 GHz and that is accompanied by an Adreno 620 GPU well above the average, at the level of graphic processing, of other processors of the same range.

This processor, according to Qualcomm, offers 10% more CPU performance, 40% GPU and 100% AI functions, compared to the previous generation of brand chipsets.

The OnePlus Nord mimics the camera setup of other mid-range mobiles and sports 4 sensors at the rear, spearheaded by a primary 48MP lens, accompanied by an 8MP ultra-wide-angle with f / 2.25 and a 119º field of view, a 2 MP macro camera with f / 2.4 and a 5 MP depth sensor with f / 2.4 .. To this we have to add two sensors on the front, something that we have never seen before on a brand smartphone.

The OnePlus Nord boasts the same 48MP Sony IMX586 sensor that we found in the OnePlus 8, with a large f / 1.75 aperture to capture a generous amount of light and improve night photography, something in which its image stabilization system stands out. Optical (OIS) and its AI that is dedicated to removing unwanted noise and sharpening detail in difficult shooting scenarios.

This night mode has been enhanced to just press the shutter button, capture up to nine different photos at different exposures and interlace them in seconds to generate clearer, brighter and more detailed photos in low light.

In front, we have a 32 MP main sensor, which is supported by an 8 MP ultra-wide-angle that offers a 105º field of view so that more than one person can always fit in the same photo.

The smartphone captures video clips at 4K and 30 fps although if the resolution is reduced to 1080p we can collect clips in Super Slow Motion at 240 fps. The double front sensor also allows us to record videos at 4K and at a speed of 30 or 60 fps.

Battery That Sounds Familiar To Us

The OnePlus smartphone is once again betting on good battery specifications. That is why it mounts a 4115 mAh cell with Warp Charge 30T or, what is the same, with a 30W fast charge that allows reaching 0 to 70% of energy in 30º.

At the moment there are no data on their autonomy.

On a physical level we are left with the USB type C port for battery charging and data transfer at the same time that we can connect the headphones, as there is no minijack port. The fingerprint sensor is located on the phone screen.

The Best And The Worst

The Worst Of The OnePlus Nord

Apple users must be familiar with the Apple FairPlay Streaming DRM, all the music contents available on Apple Music have copyright issued to it....
Read more
REVIEWS